An Intranet for offline ICT Centres... and technicians!

Together with technicians from Mzuzu University, Malawi, a team from FAIR has been upgrading and maintaining 3 centres established in September 2013, approximately 1½ years after their birth. The upgrade has targeted especially the software and informational resources at the centres, and the future plans are to implement an efficient routine to keep distributing such updates not only to newly established centres, but also to those already members of the project.

The upgraded platform extends our former works on setting up an combined server for Ubuntu Linux, network installations, network services, and informational resources such as Wikipedia.

Results of our upgrade effort are good. Being present at the centres and with the secondary school teachers makes the potential of the offline resources very obvious. Moreover, sharing the experience with technicians who are knowledgeable about the day-to-day challenges of technical maintenance, gives us a great opportunity to improve our collaboration and generate ideas for the future.

What's been especially noteworthy on this trip, is that people, both teachers, technicians, students, head teachers, and government education staffers are showing enthusiasm for the open source platform. What's needed in the future is to build the momentum such that people involved are not just consumers of open source, but become co-creators. It's difficult with the sparse bandwidth, but local sharing of teaching materials could be the start of such.

A big reason to draw in local co-creators, is that resources distributed are mainly created in other continents. Malawian resources have an potential to be created and distributed, too. Currently, we are working on bringing more local-language Chichewa resources in, and to search out Malawian organizations with existing knowledge collections that can be included.

The platform contains Ubuntu 14.04, the full software repositories, and a range of offline contents, with big thanks to projects such as Kiwix, KA Lite, Project Gutenberg, Why Poverty, and Why Democracy.. amongst others.

The many resources are now collected in an Intranet with introductury texts and a bit of navigation. Resources that are not already distributed in a bundle such as the movie projects or NICE's publications, use the Intranet's platform to display descriptions and thumbnails. See screenshots [1] [2].

We've focused more on making the platform modular this time, and will be continuing this effort in the future. It's easy to distribute updates to the platform's codebase, but the data itself would always have to be distributed by hard drives.

Visiting centers, we often find that a computer has been unplugged. Someone will tell us "this one doesn't work", but the explanation is lost. There will be confusion about who identified the problem, or that person will have forgotten the original problem.

The lack of technical log books, means that the same tasks of diagnosing and solving recurring issues are repeated. A computer may not be broken but often just has a perculiar feature. Those vary from graphics drivers, a USB keyboard that doesn't respond during boot time, a network card with a different interface ID.

But we also need to keep track of inventory. When an additional RAM block is inserted, a hard drive is replaced, or when a whole machine is replaced.

To solve all this, we've put a technicians log and made a computer's ID as part of the installation procedure such that computers are known to the server.

So now a technician can leave a message in the technical log for her colleagues or future self. 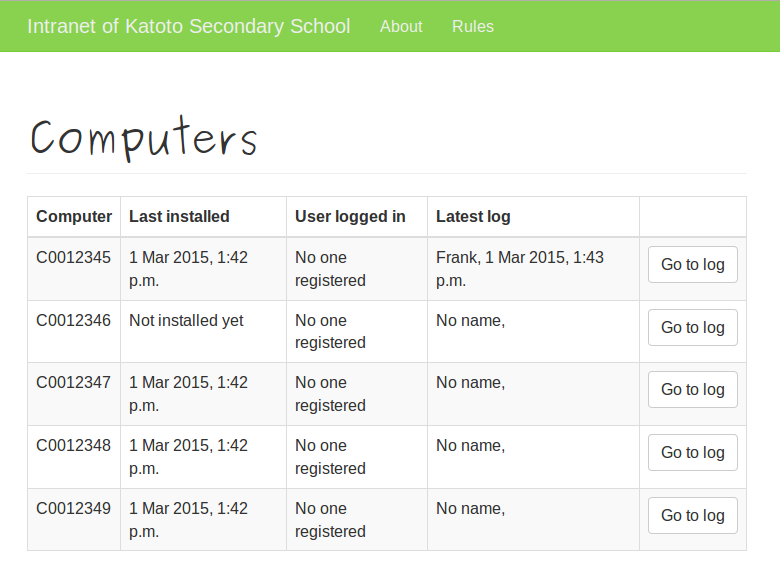 In order to gain a more detailed insight into the usage of computers, we've also added a bit of logging of computer usage, such that the duration of each session is captured, and clicks on Intranet resources are counted.

This way, we can identify issues with unused resources and compare popularity of different resources as well as document if our efforts have grounds.

Sessions are logged according to a computer's ID so problems can be identified through the usage of individual computers.

Main challenge: Statistics are collected at each server and will have to be gathered! This is not the only activity of sync'ing data, but will stress the need to find an efficient method and a recurring routine.

It's hard, perhaps impossible, to prepare software for a project like this. Too much different hardware with individual issues, and meeting the users' behaviours is always different. So setting up the first center will be as much a development effort as the homework we can do before a trip.

Our basic hind-sight verdict would probably be: Upgrading from Ubuntu 12.04 to 14.04 may be an easy step at first, but the devil is in the details. New hardware bugs are introduced (especially on legacy hardware), and many little configuration API changes will take time to track down and repair.

But some things have to be prepared:

After a trip, there's lots of fresh knowledge to reap, so its important to keep the effort going. This time around, we've created a Github repository and will keep on improving the project. As soon as the project is ready for a broader adaptation, the audience contributing will improve the platform, such is open source.

ICT4D - Not all ICTs will help development

Back to blog index